This March, during Women’s History Month, EquiLend will be featuring Q&As with some of the EquiLend women who are helping to shape our business! 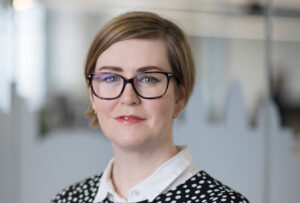 Who are the women who inspire you the most, and why?

The woman who has been my greatest inspiration and shaped my life, hands down, has been my mother. In the world we live in, we often look to the famous and rich for influence and direction. It is perhaps the very lack of both of the former, and my mother’s ability to strive and overcome regardless, which inspires me most.

My grandmother, an impressive woman in her own right, ensured that all nine of her children were well educated, and most to university level—rare in a rural Ireland of the ’40s and ’50s. With an education under her belt, my mother moved to Dublin in the ’60s and started work for Aer Lingus (Ireland’s national airline carrier).

The Marriage Bar, which called for the termination and restriction of married women in employment (which was not lifted in Ireland until 1973), unfortunately spelled the end of her career dreams. Family was at her core, and she went on to raise four children as a single mother. While life may have dealt her a tough hand, she never once complained. Her ability to face challenges with dignity always amazed me. She instilled in me an unquenchable independence and a determined work ethic.

What advice would you give your younger self?

Do not be afraid to fail. Some of life’s most important lessons are learned through mistakes. Take the chances offered, find your own luck and grab new experiences with both hands. “Success is not final, and failure is not fatal”; the road to both is often the same. Oh, and don’t forget to study more!

As we’re celebrating Women’s History Month, what advice would you give to any women reading this?

Excitedly, we will see the launch of the Women in Securities Finance London chapter in this Women’s History Month, where the mission to foster connections and promote the growth of women in the securities finance industry expands with a global footprint. Advice is often far easier to give than to adopt; however, here are a few I have followed myself:

Click here to view all of our Women's History Month Q&As!